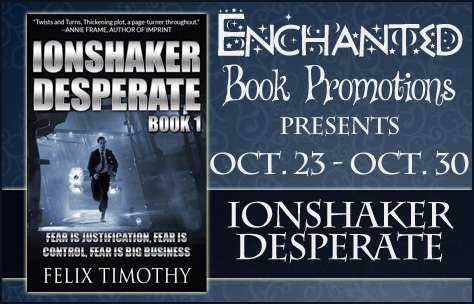 I guess I didn’t really know until I started writing Ionshaker Desperate towards the end of 2008, and even then it wasn’t called Ionshaker Desperate. But anyhow, I do remember an incident when  I was in the sixth grade. I wrote an essay as an assignment and my English teacher was convinced that I had copied from somewhere else (I guess it was that good for a sixth-grader huh!). I didn’t make much out of it …I just defended myself against the allegations…but that should have been an indicator to me. Then in high school I wrote some stories that kept getting lost and I kept writing different ones. So I guess, though all the signs were there early enough…I never really paid attention.

Where did you get the inspiration from for Ionshaker Desperate?

This one you’re gonna laugh. It was a combination of reading Sidney Sheldon’s thriller Doomsday Conspiracy and my hook on the storylines of the hit TV series 24. I loved the urgency, the fast-pace, the twists and the uncertainty in 24 that I started imagining creating such captivating stories of my own and when I finished reading Doomsday Conspiracy I started typing…

How long did it take you to write Ionshaker Desperate from start to finish?

The first draft I guess something like three to four months…but it would take FIVE years for me to publish the story on Amazon.

Editing was a nightmare for me. First I contracted a certain self-publishing company…they promised heaven. They said they’d do everything as long as I paid (which I did), but they didn’t even edit the manuscript or give me any advice on the plot or marketing (and as you can imagine I had zero writing experience. I was relying on them). So as you can imagine the project was a huge flop…and so after losing money, not achieving my dream and feeling dejected I switched my mind to other things for three years but the writing urge kept burning until last year when I started the whole process again.

What was the most challenging part about writing Ionshaker Desperate?

Research. I had to do A LOT OF RESEARCH. The story is about a nuclear device that can control all nuclear weapons on earth that was stolen from the government by the perpetration of powerful people in government. Myself am not a nuclear scientist, am not the President, a politician and am not an FBI or a CIA agent. So I had to query the FBI on their procedures, research on undercover operations and White House protocols and the likes. But that was great because I now know a lot more than when I was writing the draft which is handy as I write the sequel to Ionshaker Desperate called Ionshaker Redemption.

First, I intent to release my second thriller that I wrote immediately after completing Ionshaker Desperate…its called Terror Alert(its about terrorists who infect the dreaded Ebola virus into Los Angeles causing over 50,000 deaths in one night causing a total quarantine – read more on my blog http://feltim.blogspot.com).

Second, I hope to complete the sequel to Ionshaker Desperate called Ionshaker Redemption. 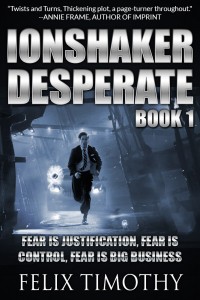 Trey’s wife, his wife’s shrink and his attorney are shot dead. His ex-girlfriend narrowly escapes death, gets admitted in ICU in critical condition, but mysteriously disappears from the hospital just a few hours after being admitted. The four of them are connected to Trey.

Brett (the lead FBI detective) pursues Trey (now the sole murder suspect), finds himself framed for two new other murders, becomes a wanted man and starts running like Trey, after learning that it’s not Trey but Al Fakir (an Al Qaeda splinter group) that is killing anyone with the knowledge that Al Fakir has stolen Ionshaker (a cutting edge universal nuclear management device).

Al Fakir’s intention with Ionshaker is not very clear but it is obvious that the country that possesses Ionshaker possesses all world nuclear power on its finger tips because the device can control any nuke on earth. It is suspected that either Iran, Germany, China, Russia or Pakistan could be behind Ionshaker’s disappearance and in the event that Ionshaker actually leaves American soil, then the U.S automatically loses its dominance, security and stability. Worse still, if Al Fakir’s imagination is to detonate American nukes, then their best imagination will be America’s worst nightmare.

In response, the President sanctions a covert mission led by the only two people that can stop Al Fakir: Trey (an ex CIA) and Brett (now ex FBI) to repossess Ionshaker from Al Fakir before the device leaves the country. Before things get better, they will first get worse as people will die, scandals will be exposed, and America will be desperate. The mission is called Ionshaker Desperate.

Hi, my name is Felix Timothy, and Ionshaker Desperate is first thriller. I began writing the first draft towards the end of 2008 after getting hooked to the story lines of the hit TV program 24. I always knew I could write but I never really got the courage to start writing until 2008, and now after many years, many re-writes and many reviews I am happy to have my story published. At the moment I am working on the sequel to Ionshaker Desperate in the Ionshaker series, its called Ionshaker Redemption and I hope to release it at the end of the year. In addition to writing novels I have also completed writing the screenplay for Ionshaker Desperate.