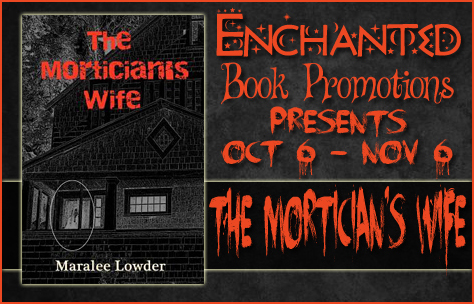 I’m hosting an interview today with Maralee Lowder, the author of “The Mortician’s Wife”, a paranormal mystery novel. Thank you for answering my questions, Maralee!

I never took my writing seriously until a teacher in my local community college wrote across the top of one of my papers, “I like how you write.”  With just those few words, she ignited a flame in me that I’d never dared dream existed.  I wish I knew how to reach her to tell her how much those words meant to me.

That’s not to say that I suddenly set out to become a published writer.  The idea that I could actually write a complete book was still something I could not wrap my brain around.  Then, on a lark, I started writing a historical romance, sharing each chapter as I finished it with the other secretaries in my building.  It wasn’t until one of my fellow workers, and now a very dear friend, suggested that we should attend a RWA (Romance Writers of America) meeting that I began to take writing seriously.

I’d just like to say one thing here that does not really relate to this question, yet I believe is too important to ignore.  I suggest to anyone who is truly interested in becoming a published writer, join a writer’s group like RWA.  I’ve learned more about writing and the publishing industry at their meetings than anywhere else.  I can’t stress the value of such organizations too much.

Where did you get the inspiration for The Mortician’s Wife?

I was always fascinated by an old building in my town that had once been a mortuary, but was uninhabited when I first noticed it.  I was a beautiful old building, but needed a whole lot of tender loving care.  And, of course, the stories around town was that it was haunted.  Unable to control my curiosity, I finally located the current owner at the time and was given a bottom to top tour.

And what a tour it was!  On the first floor, in what had once been the actual mortuary, I discovered shelves filled with chemicals, files, and most of the equipment needed for preparing corpses for burial.  On the next floor, although most of the furnishing had long been removed, there was still a gorgeous old pump organ, which remains in the house to this day.  The third floor was where the families had lived.  The bathrooms still contained antique claw foot tubs.  And, in the closets…drum roll here please…there still hung vintage clothing from the last permanent resident, the last mortician’s wife!

When I returned home that day, the die was cast.  I did not write The Mortician’s Wife, the old mortuary did it for me.

How long did it take you to write The Mortician’s Wife from start to finish?

That’s difficult for me to say.  I’m a weird sort of person who pays very little attention to either clocks or calendars.  All I know for sure is, the story flowed through me at a faster pace than any book I’ve ever written, before or after The Mortician’s Wife.  It was one wild ride!

What is your editing process?

I always edit as I go along.  I’ll write a scene, then stop for the day.  The next day I edit what I wrote the day before, then continue with another scene.  I do that write, edit, write, edit… until the book is finished.  Then I go back to the beginning and edit it once again.  Then, I go back and read it aloud, editing again.  I’ll often send it off to my daughter for ideas.  (She is also a writer, and is a huge asset.)  Often times, I’ll go over it one more time, looking for typos, before sending it to my publisher – who has it professionally edited.  Usually, by the time it goes to the publisher I have a very clean manuscript.

Again, I want to speak to writers who are just beginning their careers.  Don’t be afraid of the edits.  In spite of everything you knew in school, the editing part is actually very gratifying.  In fact, for me, it’s the best part of writing.

What was the most challenging part about writing The Mortician’s Wife?

One of the most challenging, and, all right, I’ll admit it, the fun part of writing The Mortician’s Wife was finding the best way to kill the villain.  I had several challenges.  Shooting or stabbing would not work.  If she poisoned him, it had to be with something that could not be traced back to her.  Preferably, the poison needed to be something that would be undetectable.

The second biggest challenge, was to find ways to make the villain evil enough to make the reader be okay with having Ada killing him.

My first writing goal, to write a sequel to The Mortician’s Wife, has already been accomplished.  The Mortician’s Revenge is due to come out at Amazon this month.  Now, I’m working on the third Mortician book, The Mortician’s Legacy.  I’m a little over half way through it, and hope to have it finished before the end of the year.

Are you working on something right now?  If so, can you tell us more about it?

As I said in answer to the last question, my current wip is The Mortician’s Legacy.  It is related to the original mortician by having his spirit attach itself to a jacket.  Through it, Horace is able to continue doing his evil deeds.  A great deal of the action takes place in the present day mortuary.

The current owner has refurbished and redecorated the building, creating a truly fabulous home.  She shares it with guests as a bed and breakfast named The Old Mortuary Inn.  She and I have become fast friends, so I am access to all of her stories of hauntings in the building.

I’d actually told myself that The Mortician’s Legacy would be the last Mortician book, but as luck would have it, I’m beginning to feel myself being drawn into one more plot featuring the building.  Only time will tell if I’ll succumb to the pressure! 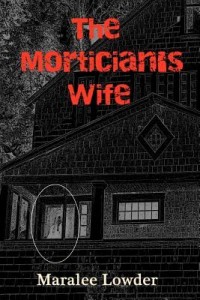 Horace Carpenter has it all…a lucrative business as the only mortician in town, a home he can be proud of and a reputation of being one of the most popular men in town.  Maybe he should be content with what he has.  But he wants more.

Ada Hawkins, the daughter of the town’s only physician has lived a sheltered yet, privileged life.  When she meets Horace at her 18th birthday party, the shy, physically plain girl is entranced by his good looks and suave manners.  In six months they are married, and in less than one week Ada suspects she has made the mistake of her life.

And that is where the story might have ended…should have ended.  Ada is to endure years of torment until her husband commits the most unforgivable act possible.  From that day forward she lives for one thing only, not just to end the torment, but to do it in the hateful way possible.

She achieves her goal, only to discover true evil does not die.