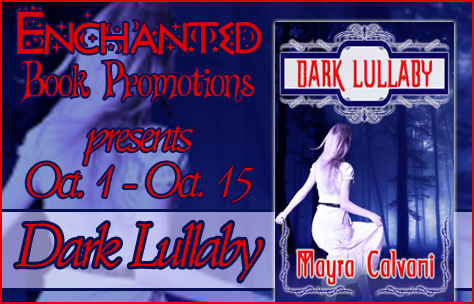 Mayra Calvani writes fiction and nonfiction for children and adults and has authored over a dozen books, some of which have won awards. Her stories, reviews, interviews and articles have appeared on numerous publications such as The Writer, Writer’s Journal, Multicultural Review, and Bloomsbury Review, among many others. When she’s not writing, reading, editing or reviewing, she enjoys walking her dog, traveling, and spending time with her family. She’s currently touring the blogosphere to promote her supernatural thriller, Dark Lullaby.

When I was a teenager. In secondary school I wrote stories and plays. At 16, I wrote a romance novel which was secretly passed around in class. By 20, writing was already a passion, an obsession. I saw myself doing no other thing than becoming an author.

Where did you get the inspiration from for Dark Lullaby?

I lived in Turkey during my twenties. It was an incredible experience. Not only did I learn to speak Turkish, but I also made wonderful friends and learned a ton about their customs and folklore.

Many Turkish people believe in the cin (pronounced ‘jean’). Not the jinn as westerners know it; you know, the genie that comes out of magic lamps. The cin is a much darker creature that could be lightly compared to the fairy. In Turkish myth, it is a being that lives in the forests. It can be good or evil. It is of spirit form but can shapeshift into an animal or human. Like the western fairy, it is often volatile, mischievous and prone to pranks, some of which can be deadly.

Now, want me to get creepy? It has a bizarre taste for human liver and, when in human form, its feet are set backwards.

Oh, and those little lights that you often see in the woods on warm summer nights, otherwise known as fireflies? They aren’t fireflies. They’re cin.

I was darkly fascinated by the accounts I heard, fascinated enough to write a novel. Thus, Dark Lullaby was born. Of course, I mixed the real tradition with my own fictional lore, thus creating a new type of supernatural being.

But it wasn’t only Turkish folklore that inspired me. The cin sparked my creativity into starting the story, but there were other influences.

My love for astronomy and cosmology was another major influence. I wanted my protagonist to be an astrophysicist, a man of science, someone whose thoughts and beliefs were ruled by logic and reason, this way there would be tension when I made him face the unexplained world of the supernatural. The result is that he falls into a state of psychosis, to the point where the reader must wonder if what is happening is real or imaginary.

How long did it take you to write Dark Lullaby from start to finish?

What was the most challenging part about writing Dark Lullaby?

The same for any other book: keeping focused and not procrastinate. Keeping confident throughout the process and, like Steven Pressfield says in his fantastic book, Do the Work, “trusting the soup.”

I’m currently working on two projects: one is a YA psychological/supernatural thriller; the other an anthology titled, Latina Authors and Their Muses, forthcoming by Twilight Times Books in the spring of 2014. 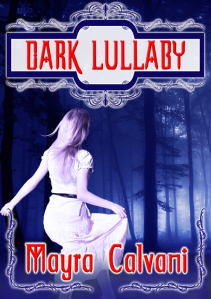 At a tavern one Friday night, astrophysicist Gabriel Diaz meets a mysterious young woman. Captivated by her beauty as well as her views on good and evil, he spends the next several days with her. After a while, however, he begins to notice a strangeness in her…especially the way she seems to take pleasure in toying with his conscience.

The young woman, Kamilah, invites him to Rize, Turkey, where she claims her family owns a cottage in the woods. In spite of his heavy workload and the disturbing visions and nightmares about his sister’s baby that is due to be born soon, Gabriel agrees to go with her.

But nothing, not even the stunning beauty of the Black Sea, can disguise the horror of her nature…In a place where death dwells and illusion and reality seem as one, Gabriel must now come to terms with his own demons in order to save his sister’s unborn child, and ultimately, his own soul. 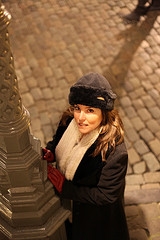 A native of San Juan, Puerto Rico, Mayra Calvani writes fiction and nonfiction for children and adults and has authored over a dozen books, some of which have won awards. Her stories, reviews, interviews and articles have appeared on numerous publications such as The Writer, Writer’s Journal, Multicultural Review, and Bloomsbury Review, among many others. When she’s not writing, reading, editing or reviewing, she enjoys walking her dog, traveling, and spending time with her family. She has travelled extensively and lived in 3 continents, but now calls Belgium her home.

Visit her website at www.mayraCalvani.com. For her children’s books, visit www.MayrasSecretBookcase.com.

Mayra was kind enough to offer a copy of her non-fiction book “The Slippery Art of Book Reviewing” and a $25 Amazon Gift Card for a giveaway during the tour! Fill in the Rafflecopter form below to participate!