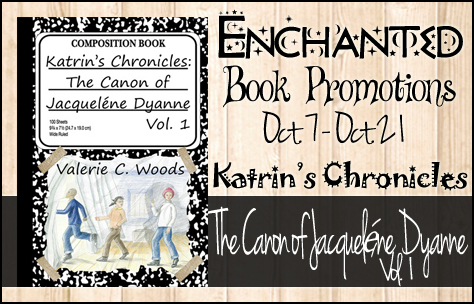 I’m hosting another author on my blog today, this time middle grade author Valerie C. Woods, who is currently touring with her MG psychic girl detectives book “Katrin’s Chronicles: The Canon of Jacqueléne Dyanne, Volume 1”. Wow, that’s a mouthful! Thanks for answering my questions, Valerie!

1) When did you know you wanted to become a writer?

Much like the character of Katrin in the book, I was always writing, but didn’t consider it would be a career. I thought I’d be a teacher or a doctor. But then, years later, after deciding to be an actor who could play a teacher or doctor, I couldn’t find material I wanted to perform for a casting workshop in NYC. I wrote something… it went well. Then I started writing audition pieces for other actors. When I couldn’t get a publisher to do a book, a good friend suggested I self-publish my own book of audition monologues. That’s when the light bulb finally turned on about being a Writer with a capital W. I haven’t looked back since. And that book of audition monologues, “Something for Everyone” is still available through Samuel French, Inc.

2) What was your inspiration for writing Katrin’s Chronicles: The Canon of Jacqueléne Dyanne Vol 1?

It was during a lean period, financially, in my writing career and I didn’t have a birthday present for my older sister. She is a fan of my writing and is always nagging, oh, I mean encouraging, me to write more. So, I decided to write a little story about the two of us back when we were kids that included old pictures from our childhood. I had a memory of a summer day when my sister decided we would have an adventure. She packed “providions” in a brown paper lunch bag and proceeded to lead me on a trek to distant lands. Our neighborhood street became a foreign metropolis. The vacant lot transformed into a desert where we found an oasis in which to rest and consume our rations. We are both avid mystery readers, and so it was fun to do a fictional turn on our lives, which evolved into our version of Dr. Watson and Sherlock Holmes, Chicago-style.

3) How long did it take you to write your book from start to finish?

That’s tricky to calculate, because I didn’t know I was writing a novel when I wrote that first story, which ended up being the first case in the book.  I wrote my sister another story as her Christmas present and then a third for Mother’s Day. That’s when I realized it could be a novel. The first draft was complete within six months. And because I couldn’t find a publisher, I did re-writes for another two years! So, all told, I’d say it was about 3 years, start to finish.

Very long! That’s because my first draft is usually quick and thin. Once the inspiration strikes, I like to get the basic story down right away, knowing it’s far from perfect. Then I let a very few trusted people read it, take their notes. Then let it sit for a while, maybe several weeks, doing research mostly. Then I read it once again fresh, and begin to put the flesh on the bones of the story, give it more shape and layers. Then I again, leave it alone for awhile, so I kind of forget it. And try to read it a third time as if I’m new to the story. That’s when a lot of things get cut or re-written for clarity, until finally, I turn it over to an editor and proofreader.

5) What was the most challenging part about writing your book?

Finishing it. I didn’t want to let the characters go. It helps that this is a series. Before I could complete the first book, I needed to outline the next, and set the end of the series. So that took a bit of time.

Complete the draft of Volume 2 in the Katrin’s Chronicles series. This one won’t take as long as the first. We’re looking at a release date in November 2014. And get to work on creating the deck of Wisdom Cards and its companion book, which become a key part of the story.

Yes, I’m also working on an adult contemporary novel that mixes mysticism with a murder mystery. That’s all I want to say about that for now. But I’ll definitely keep you posted! 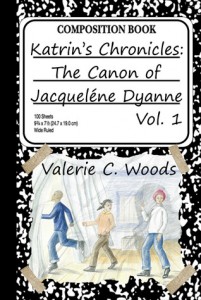 On the verge of entering high school, precociously eloquent 13 -year-old Katrin DuBois feels it’s never too soon to start an autobiography. She decides to set the record straight about the outrageous rumors concerning certain adventures that began when she was in sixth grade. That’s when her elder sister, 8th grader J. Dyanne, began exhibiting extraordinary detecting skills, and emerging psychic abilities.

Set during the latter half of 1968, these African-American tweens live in a working class neighborhood on Chicago’s South Side. They manage to thrive in a world of social change with multi-generational family support, creative quick-thinking and fearless inquisitiveness. The dog days of August find them prohibited by their parents from visiting the Central Library downtown because of the riots during the Democratic Convention. However, there’s plenty of adventure in their own neighborhood as they become swept up in family mysteries, neighborhood political schemes and the discovery of a surprising legacy of psychic, even supernatural, talent.

Katrin’s Chronicles: The Canon of Jacqueléne Dyanne, expands the girl detective genre to include these smart, sister sleuths.

An avid reader while growing up on Chicago’s South Side, Ms. Woods began writing when, as a struggling actress in New York, she couldn’t find suitable audition material for women of color. This led her to write a book of audition monologues, Something for Everyone (50 Original Monologues). The book was initially self-published and is now published by renowned theatrical play publisher, Samuel French, Inc. (www.VCWoods.com)

After adapting an average play into a better screenplay, Ms. Woods was awarded a Walt Disney Screenwriting Fellowship and followed that up with writing and producing on network and cable drama series such as Under One Roof, Touched By An Angel, Promised Land, Any Day Now and Soul Food.

But fiction, her first love, compelled her to enter the world of prose. She had always written bits of fiction, short stories and a little poetry here and there.

In November 2012, Ms. Woods founded a micro -press: BooksEndependent, LLC (www.BooksEndependent .com) to support her work and the work of other new, independent authors of fiction and non-fiction.

The first title was Ms. Woods’ novella, I Believe … A Ghost Story for the Holidays . (Amazon.com) Then, what began as a gift became her second publication.

Several years ago, needing a birthday present for her sister Ms. Woods wrote a short story about a girl detective — a highly fictionalized autobiography of the adventures she and her sister experienced in childhood. Another story was written for Christmas, then one for Mother’s Day. That’s when Ms. Woods realized she was writing the kind of novel she and her sister would have loved to read as children, but which didn’t exist – the adventures of African-American Girl Detectives!

The result, Katrin’s Chronicles: The Canon of Jacqueléne Dyanne, Vol. 1 is now available in paperback and Kindle edition at Amazon.com.