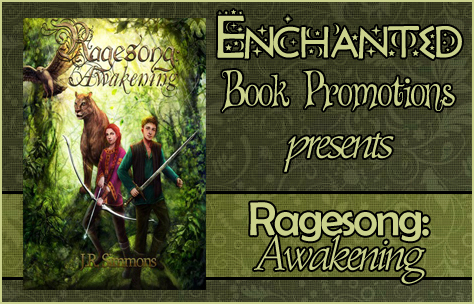 I’m hosting an interview with J.R. Simmons, the author of YA fantasy novel “Ragesong: Awakening”. Thank you for answering my questions!

I’ve always played with the idea of writing, but I never really took it seriously.  I have folders of unfinished projects sitting on multiple computers, but I usually fizzled out before getting anywhere near the end.  A friend of mine published recently, and she walked me through the process.  When I saw how obtainable it was, I buckled down and I was able to finish my story.

2) Where did you get the inspiration from for Ragesong: Awakening?

The idea popped into my head a few years ago and I made a quick sketch about a small part of the book.  Then life happened (or I got sucked into one video game or another) and I forgot about it.  Inspiration came in a lot of things.  I had just tried (and failed) to form an acapella group, and I was sitting between games.  Then I found my old idea and it suddenly took off.  The characters changed, but the idea stayed the same (I brought the characters back into book two with only minor variations).  The characters are inspired by my love of music and gaming.  The book is inspired by my devotion to fantasy.

3) How long did it take you to write Ragesong: Awakening from start to finish?

It took me about 2-3 months to write it.  I’ve struggled with motivation in writing projects in the past, but I didn’t have any problems with it this time.  It just came so easily.  I kept expecting the well to dry up, but I struggled more with having to sort through the flood of ideas that came through instead of the issue of not having enough (and I’d much rather have that problem).

Difficult!  I have a tendency towards run-on sentences and I definitely have words that I like to use…a lot!  Luckily I worked with a lot of talented people and they helped me to identify my…let’s call them ‘problem areas’. I’ll tell you, it is always hard seeing that manuscript come back with all of the red lines and text.  In the end, it was worth it because it made the book much better and easier to read.

5) What was the most challenging part about writing Ragesong: Awakening?

The funny thing is that Ragesong: Awakening wasn’t at all hard to write.  It came so easily. I am struggling much more with book 2.  If I had to pick one thing though, it would probably have to be when I was trying to tie up loose ends.  The good thing was that I had wonderful beta readers and they helped to find loose threads that I had left unattended.

My major writing goal for right now is to finish the second book and have it ready for a Spring release.  Other than that, my other goals are to finish Bioshock: Infinite and get my kids through soccer and basketball.

I am nearly done with the second book, which will be called Ragesong: Uprising!  It has been so much fun to open up more of Fermicia.  I don’t want to say much yet, but I will say that Ragesong: Awakening only explored a very small portion of Fermicia. Jake and Sam have grown up a bit and they have a lot more to overcome.  I can’t wait to share it with people! 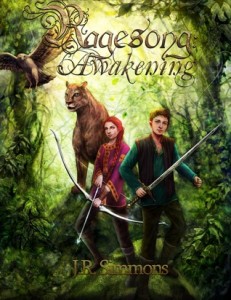 Jake starts his first day of junior high completely oblivious to the fact that he has been chosen for something incredible. That same afternoon, he learns that he has been marked as one with the power to save an entire kingdom. Through the course of his journey, Jake discovers that his advanced musical abilities are peculiarly connected to a mysterious power known as Ragesong. Joined by a shy, young girl with similar musical talents and two Changelings that hold a fierce loyalty to their homeland and king, Jake must learn to harness this ability in order to survive the dangers of a hostile new world.