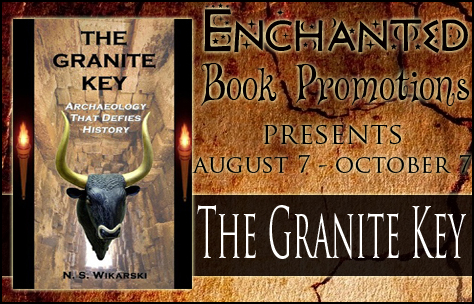 I’m hosting an interview today with author N.S. Wikarski, the author of archaeological thriller “The Granite Key”. Thank you for answering my questions!

From the time I was in grammar school, I felt that I would eventually be a writer. However, my adult life took a career detour for a few decades – first in banking and then in computer consulting. My wake-up call came when I reached the age of forty without having written a single novel. A year later I began The Fall Of White City, which was the first title in my Gilded Age series. I’ve been writing, off and on, ever since then.

2) Where did you get the inspiration from for The Granite Key?

I’ve always been interested in feminist history – or “herstory.” When I came across archaeological evidence suggesting that human society wasn’t originally patriarchal, that opened the floodgates to all sorts of other questions. Why is the majority half of the human race treated as a minority? Culturally, how did we get to be this way and why? When I discovered the answers to those questions, I felt inspired to tell a story that shines a spotlight on female-centric societies which have either been forgotten or suppressed. I felt it was time for the other half of the story of human civilization to be told.

3) How long did it take you to write The Granite Key from start to finish?

Before I can answer that question, I should mention that the research portion of each of my books takes quite a while. The actual writing process is easier than the research. It takes about eight months. That’s been true of each of the books in the series.

I’m a fanatical editor. Some of my writer friends dislike the editing process intensely. I’m just the reverse. I dislike getting the first draft down on paper. That’s the hardest part—trying to condense a nebulous imaginative image into a string of finite words. After that, the fun begins. At any given time, I work on a rolling three chapter basis. The most recently-written chapter is the roughest draft. The one in the middle is semi-polished. The third in line has been reread and corrected multiple times. I lose count of how many times I revise a chapter. Some are easy. Some don’t express exactly what I want to say in the way I want to say it. Those take longer to get right. After the manuscript is finished, I let it sit for a couple of months while I work on other things. That allows me to gain some perspective on the material. Then I go back and do a final read-through and catch whatever mistakes I missed on prior reads.

5) What was the most challenging part about writing The Granite Key?

Finding a way to seamlessly integrate the fact with the fiction. I needed to ensure that the mystery was never over-shadowed by the history lesson. It was a delicate balancing act which has become even trickier with each succeeding book.

To finish the fourth book in the Arkana series and do some preliminary research on book five.

I just finished writing the rough draft of the fourth volume of the Arkana series. It’s entitled The Riddle Of The Diamond Dove and will be published in December of 2013. Since there are seven books in the series, the goal is to write one book a year until they’re all finished. 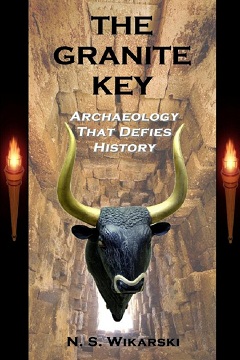 THE ARKANA SERIES: Archaeological Thrillers That Defy History
Volume One – The Granite Key

“Think ‘MEDIUM meets THE LOST SYMBOL’ and it only begins to describe the pleasures of THE GRANITE KEY – 5 Stars.” (Kindle Nation)

A Wake-Up Call
In a nightmare, nineteen year old Cassie Forsythe sees her sister attacked by a man in a cowboy hat who demands something called “the key.” Her nightmare mutates into reality before the night is over. Cassie is called to identify her sister’s body–murdered exactly as her dream foretold. Cassie dismisses her vision as a fluke and fights to get on with her life. Disconnected and aimless now that her only family is gone, she drifts until the evening when she catches the man in the cowboy hat ransacking her sister’s apartment. He bolts with an odd-looking stone cylinder–the granite key. From that moment, Cassie’s normal world evaporates.

A Secret Society
She learns that her sister led a double life–retrieving artifacts for a secret organization called the Arkana. The Arkana’s leader, an elder named Faye, explains that her group performs a controversial kind of archaeology. They scour the globe for evidence of ancient pre-patriarchal civilizations in hopes of salvaging the lost history of the world. Their network of troves safeguards artifacts from highly sophisticated goddess-worshipping cultures on every continent. Cassie’s sister had the psychic ability to touch an artifact and relive its past. Cassie has now inherited this gift. Faye wants the girl to take over her sister’s role in the organization. Cassie doubts her powers but agrees. Now an insider, she is transported to the Arkana’s mysterious underground vault in the countryside outside Chicago where the group tackles the mystery of her sister’s murder.

A Dangerous Cult
The Arkana learns that the man in the cowboy hat is a hired mercenary named Leroy Hunt and that he is working for a fundamentalist religious cult known as the Blessed Nephilim. He takes his orders directly from the cult’s domineering prophet–Abraham Metcalf. The granite key which Leroy stole is inscribed with hieroglyphics revealing the location of a mythological artifact reputed to have mystical powers–the Sage Stone. Although skeptical of its legendary capabilities, the Arkana is still afraid to allow the relic to fall into the cult’s hands. Abraham’s fanatical belief in the power of the Sage Stone could be the catalyst to start a war of religious genocide.

Unlocking The Key
Before she died, Cassie’s sister took photos of the strange markings on the granite key. The Arkana decodes the hieroglyphics which point to the ancient ruins of Minoan Crete as the hiding place of the Sage Stone. Faye hastily assembles a retrieval team including Cassie, her newly-appointed bodyguard Erik, and a British researcher named Griffin. The band of treasure hunters is mismatched and wildly dysfunctional from the start. Griffin has never gone on a field mission, Erik treats his inexperienced colleagues with contempt, and Cassie second-guesses her psychic hunches. She battles to prove herself to Erik at every turn. Their internal clashes rival the bigger crisis of what to do when they come face to face with their enemies.

A Matter Of Life Or Death
Even as they rake through megalithic tombs and Minoan palaces for clues, Abraham dispatches his son Daniel and hired gun Leroy Hunt to recover the Sage Stone. The Nephilim operatives won’t hesitate to kill anyone standing in their way. Will Cassie and her teammates avert global disaster or find themselves casualties of Abraham’s mania to exterminate the world of unbelievers? The Granite Key holds the answer. 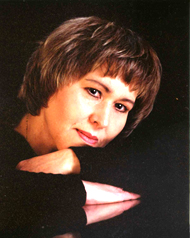 Nancy Wikarski is a fugitive from academia. After earning her Ph.D. from the University of Chicago, she became a computer consultant and then turned to mystery and historical fiction writing. She is a member of Mystery Writers of America, the Society Of Midland Authors, and has served as vice president of Sisters In Crime – Twin Cities and on the programming board of the Chicago chapter. Her short stories have appeared in Futures Magazine and DIME Anthology, while her book reviews have been featured in Murder: Past Tense and Deadly Pleasures.

She has written the Gilded Age Chicago History Mysteries series set in 1890s Chicago. Titles include The Fall Of White City (2002) and Shrouded In Thought (2005). The series has received People’s Choice Award nominations for Best First Novel and Best Historical as well as a Lovey Award for Best Traditional Amateur Sleuth.

She is currently writing the seven book Arkana Archaeology Thriller Mystery series. Titles include The Granite Key (2011), The Mountain Mother Cipher (2011), and The Dragon’s Wing Enigma (2012). The fourth volume in the series, The Riddle Of The Diamond Dove, is scheduled for publication in December of 2013. Ms. Wikarski’s work on the Arkana books has prompted Kindle Nation to call her one of its favorite authors.