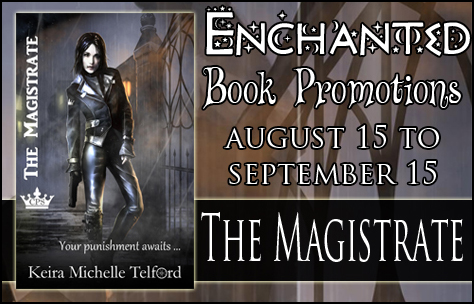 I’m happy to host an interview today with Keira Michelle Telford, the author of science fiction / lesbian romance novel “The Magistrate”. Thank you for answering my questions, Keira!

Always. Well, I always knew I wanted to be a writer. When exactly I figured out writing books was what I wanted to do, I’m not sure. I started off writing short stories (and some really bad poetry), from the age of 5 to 15. Then, I started writing film scripts. I stuck steadfastly to that till I was in my mid-twenties and took a writing course as part of my bachelor’s degree. Part of the coursework was to write the opening chapter of a book, so I took a script I’d written a few years before and rewrote the beginning in book format. That script was called SILVER, and after I wrote the opening chapter for the course, I just kept writing. The resulting book was SILVER: The Lost & Damned, which was the second book I released. I haven’t looked back since.

2) Where did you get the inspiration from for The Magistrate?

I’m never really sure how to answer questions like these, since I have no real clue where the ideas come from. I usually get an impression of a character in my head, (what they look like and their name), and then I start to build emotions around them. For example, if I feel that they’re angry, I wonder why they might be angry, and plot strands start to appear. All I knew when I started writing The Magistrate was that I wanted to write a lesbian romance. Everything else just sprang up organically as I wrote.

3) How long did it take you to write The Magistrate from start to finish?

For a complete first draft, about eight weeks. I generally write about 10,000 words a week until the first draft is finished. Some days I write 3,000 words, other days I might only write 500, but as long as I hit 5,000 by mid-week, I know I’m still on course!

It’s a multi-layered process which begins with beta-readers. After the first draft is done, I’ll wait a week, go back through it myself and rewrite portions, then send that copy out to beta-readers who tell me which bits work and which bits don’t, spot any issues with pacing, or character motivation, and I use that feedback to rewrite again. Sometimes I’ll send back out to beta-readers after I’ve made changes, or I’ll move onto editing (depending on how many changes were made, and how confident I feel). I self-edit first (trying to eliminate repetitions, spotting grammatical errors, finding awkward sentences where the language isn’t quite clear, and catching the odd typo), then it goes through a set of impartial eyes, then back to me for a final proof-reading. I always do the final proof-read myself, from a hardcopy.

5) What was the most challenging part about writing The Magistrate?

Breaking Emmeline ‘Lina’ MacKinsey’s heart. I completely fell in love with her while writing the book, and I knew there was going to come a time when bad things would happen. I hate hurting her. I just want to sweep her up in a hug and tell her everything’s going to be all right. The trouble is, though, everything might not be all right …

I’ll soon be working on the second book in The Prisonworld Trilogy, The Procuress. It’s almost ready to go out to beta-readers, and I’m aiming for an October release date. I also want to find time to write a companion novelette (only 5,000 words or so) for The Prisonworld Trilogy called Out of Twig, which I’d like to release sometime in late September. Oh, and I have a new series of paranormal romance novellas in the works …

I’m currently working on the next book in The SILVER Series, SILVER: Lex Talionis. I hope to have that finished at the end of this month. As well as being the eighth book in the series, it’s also the first book in a standalone trilogy: The Outlier Trilogy. So even if you haven’t read the rest of The SILVER Series, you can jump right in with Lex Talionis. Like The Magistrate, Lex Talionis is a dystopian science fiction, lesbian romance. Actually, it’s set in the same universe as The Prisonworld Trilogy … 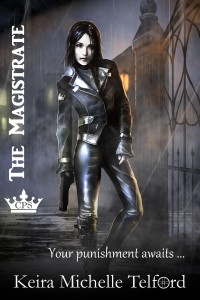 THE PRISONWORLD TRILOGY — VOLUME ONE

Poverty is rife in twenty-fourth century London, England. Crime rates are at an all-time high, and living conditions for many are bleak. Capital punishment and public hangings have been reinstated, and Magistrates, in their new role, are tasked with patrolling the streets to enforce arrest warrants and ‘terminate’ any civilians who attempt to evade justice — which isn’t always a noble pursuit.

For Carmen Wild, the latter becomes a potentially deadly problem when the discovery of a murdered prostitute brings her back into the life of her first love — the Madam of an East End cathouse — and the illicit passions between them are swiftly reignited. 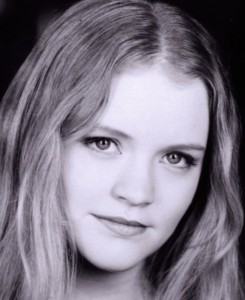 Fun fact: Her pet guinea pigs (all adopted from animal rescue shelters) were the inspiration for the monsters in The SILVER Series, the first one of which, SILVER: Acheron (A River of Pain), was released in November 2011.