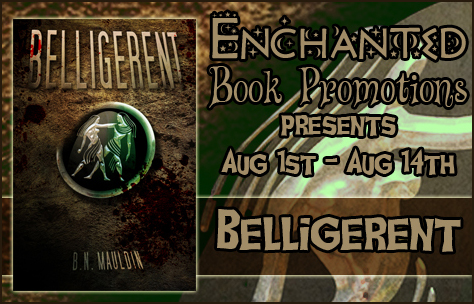 I’m hosting an interview today with B.N. Mauldin, the author of YA dystopian novel “Belligerent”. Thank you for answering my questions, B.N.!

I’ve always wanted to be an author. I grew up in a family of voracious readers, and I started reading for fun when I was around three years old. Shortly after that I began creating stories of my own.

2) Where did you get the inspiration from for Belligerent?

I’ve always been interested in ancient civilizations, so I minored in Classical studies while I was at university. It was during one of my classes there that I began playing around with the idea of a neo-Roman society using characters I had actually developed for a completely different manuscript.

3) How long did it take you to write Belligerent from start to finish?

The characters have been around for a few years now, and I’ve written them into all kinds of worlds and situations. Belligerent itself resulted from my deciding to take those characters and use them during Nanowrimo (a month long writing challenge). Basically I wrote the first draft in one month, and I edited it for roughly three months before working with Fable Press on final edits. It was actually all very quick compared to how I normally write.

It’s absolutely frustrating. I have to take breaks and work on other projects because if I don’t I’ll keep rereading my work as it sounds in my head instead of how it actually appears on screen. I edit mainly at night from about midnight until four or so in the morning, and I save every piece I cut just in case I decide later it shouldn’t have been removed. The most productive part of my editing process is when I get with my friend Ashley, who is a writer herself, and have her rip my manuscripts to pieces.

5) What was the most challenging part about writing  Belligerent?

I want to finish the second part of the Vicara series in a timely manner.

Mainly I’m focusing on the sequel to Belligerent. It still follows Ryan and his adventures, however, I think it’s a bit darker than Belligerent.

Thank you for answering my questions! 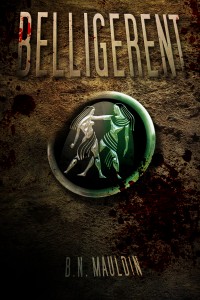 In a dystopian future the populace is segregated into castes. Belligerents, the lowest of status, are comprised of criminals and outcasts. Content as a faceless Commoner, Ryan has made a life for himself on the streets as a car thief. While the work isn’t the most noble, he’s known as one of the best despite his young age.

Ryan’s skills catch the eye of a flagrant Owner, bent on winning the virtual competition: Vicara. Newly branded as a Belligerent, Ryan struggles for freedom and acceptance at an academy specialized in training teams for Vicara. Ryan’s place on the team is shaky as he learns the truth and tragedy behind the person he replaces.

Join the Belligerents as we get our first look into the world of Vicara! 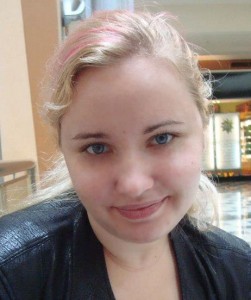 Writing since she was “old enough to hold a crayon”, B.N. Mauldin resides in Lexington, North Carolina with her two cats. Her parents, Bill, Bobby, Shirley, and Mary have always been great sources of encouragement, as well as her two younger brothers, Matthew and Donovan, whose imaginations inspire her writing.  A vital element of Mauldin’s mentality involves looking at something ordinary while contemplating what else it could be.

A tea addict and “Slytherin” at heart Mauldin also gets a spark of creativity through considerable reading of “some of the greatest works ever written.”

To read more about B.N., follow her blog: http://ofinksandteas.tumblr.com/

Belligerent is available now through Amazon.com in paperback and Kindle versions and wherever books are sold.