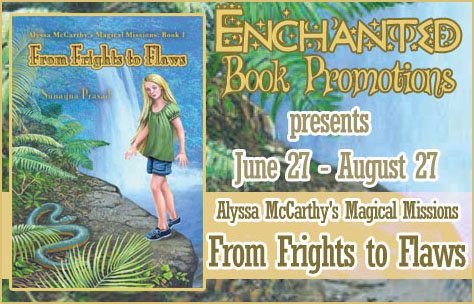 I’m hosting an interview today with middle grade author Sunayna Prasad, the author of “From Frights to Flaws”, the first book in the Alyssa McCarthy’s Magical Missions series. Thanks for answering my questions, Sunayna!

1)   When did you know you wanted to become an author?

About four years ago, the idea of “Alyssa” came to my mind while taking a shower. I decided to write a novel based on my childhood imagination. My main character was named Alyssa Norris, and she ran away from an orphanage to Africa, where she befriended a herd of animals. The book was called Alyssa’s African Adventures.

Sadly, that novel ended up as a failure when I published it. I tried to rewrite that novel a few times, but it didn’t work out. At some point I realized that it was better to write something brand new. I used a lot of ideas from Alyssa’s African Adventures, but as time went by, I decided that many things needed to be changed.

From Frights to Flaws has only a few similarities to Alyssa’s African Adventures, which are the protagonist’s first name, her similar physical appearance to the other main character, being twelve years old in the story, and being an orphan.

2)   Where did you get the inspiration from for From Frights to Flaws?

While I already explained my story behind it, there are more places where I got my inspirations. A lot of them came from the Harry Potter series. There’s an invisibility poncho, a potion that can turn one into someone else (but completely differently), a spell that unlocks locks, a spell that zaps wands out of hands, and my main character’s godfather. Like Sirius Black, he has long hair. He plays a minor role in this book, but for the rest of the series, he will play major roles (I won’t say how, though).

3)   How long did it take you to write From Frights to Flaws from start to finish?

About a year and three-quarters.

I used different editors since some were expensive and some used styles I didn’t like. It was also extremely difficult to finish it from start to end since I ended up going back to rewrite from the start.

5)   What was the most challenging part about writing From Frights to Flaws?

There were a lot of challenges. Showing instead of telling was a big weakness of mine in early drafts. Natural-sound dialogue and making each character talk differently was probably my biggest one, along with character development. Grammar was tough, too, but was easy to fix.

7)   Are you working on something right now? If so, can you tell us more about it?

I am writing the sequel to From Frights to Flaws. As of now, another evil wizard is hunting for Alyssa and is trying different ways to harm her. I’m still in the early stage of writing it, so I don’t want to give away too much as things will probably change by the end.

From Frights to Flaws 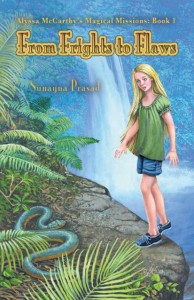 Twelve-year-old Alyssa McCarthy can no longer stand the toughness of her uncle and wants a better life. But one day she discovers not only the existence of magic, but also a villain hunting her down. The villain uses magic and magical technology to kidnap Alyssa to the Fiji Islands. As much as she wants to go home, she has to face some dangerous challenges first. Not only that, the villain himself must also be defeated. Can Alyssa succeed, even with the help of her mentors?

Sunayna Prasad has been writing stories for over thirteen years, starting at the age of six. Now nineteen, she will start her junior year of college this fall, and will study accessory design as well as continue to write for children. Aside from that, Sunayna also likes to cook, watch movies, and draw. She lives on Long Island, New York, with her family.