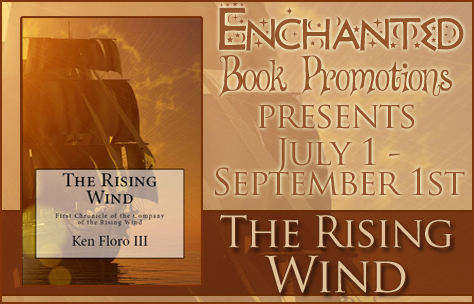 I’m hosting an interview today with fantasy author Ken Floro III, the author of “The Rising Wind”, an epic fantasy novel. Thanks for answering my questions, Ken!

1) When did you know you wanted to become an author?
In high school I wrote a true story about a mud-slinging fight I got into as a kid with a bunch of neighborhood playmates. It was the first thing I ever wrote that people enjoyed so much my classmates would ask me for copies in the halls. Since I’d always wanted to do something creative, this experience provided me with a clear path to follow. I’ve been writing non-stop ever since.

2) Where did you get the inspiration from for The Rising Wind?
I try to write the kinds of stories I’ve always wanted to read, so I select a cast of characters I like and then dump them into an adventure I’d like to experience. The Rising Wind was a chance for me to do exactly that.

3) How long did it take you to write The Rising Wind from start to finish?
I spent a little over two years writing the book, and then a further three editing and revising.

4) What is your editing process like?
For whatever reason, I can only write like I’m building a pyramid. Until I complete the first layer, I can’t climb up to start the next. Everything is written from start to finish, and I don’t move on even from one paragraph to the next until everything written thus far has exactly the flow and balance I want. As I write, I continually jump back to re-read the scene I’m working on from the start, then the chapter, then the entire book, stopping constantly to smooth any rough edges I encounter along the way. I admit it’s a tedious process, but it’s so rewarding to watch the story come alive as I go, and it’s especially exciting because, from scene to scene, I never know exactly what’s going to happen next, so I’m sharing the adventure as it unfolds.

5) What was the most challenging part about writing The Rising Wind?
Finding a way to let the characters speak in a way that sounds natural but that also fits with the archaic fantasy setting. In the past, I’ve found that attempting to have characters speak in some archaic fashion sounds stiltled, almost like your characters are reciting cryptic Shakespearean dialogue. By letting them speak with a more relaxed and contemporary vernacular they sound to me more like real people, showing nuances of character and emotion that are easier to decipher and relate to.

6) What are your writing goals for 2013?
I’m hoping to publish my ninth book later this year.

7) Are you working on something right now? If so, can you tell us more about it?
I’m currently working on a third book in my Southside Rangers series, a story about dangerous creatures invading the country and the government’s clandestine efforts to not merely stop the invasion but to keep it a secret for increasingly mysterious reasons. 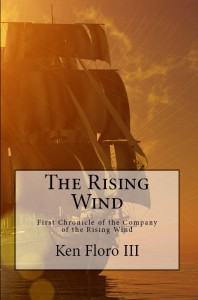 Have you ever dreamed of being swept into adventure alongside a dashing knight or two? Would you be outraged if you were suddenly thrust into terrifying dangers against your will? What if you found yourself trapped on a cursed island, in the middle of a haunted sea, surrounded by your worst enemies? When a conniving treasure-hunter hijacks the Rising Wind, its passengers will find themselves facing all this and more!

“The same trick didn’t work a third time. When Marc stepped into the ring of firelight and shouted a challenge, his adversaries shrank into the shadows across from him – more cautious now than they had been earlier. Their broad limbs and hulking silhouettes prowled the darkness at the edge of the forest, disguising their numbers. Standing exposed, in the open clearing, Marc felt vulnerable, but he knew he couldn’t run. For an anxious moment, he just stood there, uncertain what to do next. The curse of inexperience was lack of foresight, and Marc hadn’t stopped to calculate an alternative in case his original plan failed. Now he had to think on the spot. Unfortunately the present circumstance was no place for contemplation. So, in that dangerous moment, he acted on instinct.”

Ken was born and raised in the Southside of Saint Louis. By the way, did you know Saint Louis was named after King Louis IX? He was the only French monarch ever to be sainted, in part because he led two Crusades (which didn’t go so well), but mostly because his grandson, Phillip the Fair, sort of abducted the papacy to France after finagling one of his henchmen into becoming Pope. Since adding a saint to the family tree would put a little extra burnish on his royal reputation, Phillip had his pet Pope, Clement V, do him a solid. You’re welcome for the trivia.

Now, where was I? Oh, yeah, we were talking about Ken Floro III. After earning a degree in World Literature, followed by a degree in Culinary Arts, Ken soon made the obvious career move and went to work in medicine. If you’re having any trouble guessing why, then you’ve obviously never served time in the literary or culinary fields. A little taste of reality can suddenly turn a healthy paycheck, normal working hours, and long-term job security into sumptuous delicacies.

Despite the sudden change in his employment trajectory, Ken never turned away from his dream of writing. He’d nurtured a lifelong creative ambition, which had gained direction when a funny true story he wrote for a high school English class became so popular with his classmates they traded copies of it in the hall and passed them up and down the bus. After that, as they say, ‘the die was cast’.

By the way, the ancient historian Suetonius originally coined that phrase, claiming Julius Caesar said it when he crossed the River Rubicon – but in Latin, of course, iacta alea est. Ever since, those words have been used to indicate a portentous moment that affects the course of all subsequent history. In Caesar’s case, crossing the Rubicon sparked the first of the civil wars that ultimately destroyed the Roman Republic and replaced it with that institution most abhorrent to traditional Romans (who had all been conveniently killed or exiled by then): monarchy. In Ken’s case, in just means that English paper led him to focus on writing as a means to channel what the voices in his head kept telling him.

Wait! Did I say ‘the voices in his head’? Whoops, sorry. Just a little joke there – ha-ha! What I meant to say was that Ken turned to writing to express the, uh, inspiration he received from . . . the muses. That’s sounds less crazy, doesn’t it? Yeah, let’s go with that. The editor can fix all this later, right? Anyway, ever since that catalytic moment in high school, Ken has been writing as a hobby and a passion. Thus far, he’s published eight books, along with several other tidbits, all of which are available on his website, southsidecavaliers.com.