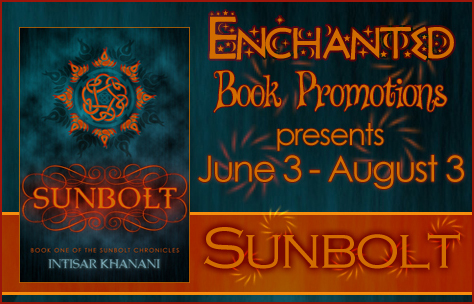 I’m hosting an interview today with fellow author and friend Intisar Khanani. Intisar is the author of young adult fantasy novel “Sunbolt” and her previously released book, “Thorn”. Thanks for answering my questions, Intisar!

1) When did you know you wanted to become an author?
I’m one of those writers who always knew this was my dream job. I’ve wanted to be an author since I penned my first book at the age of three (it was about a happy fish who went to school). However, I didn’t take my writing seriously until a couple of years ago. I was pregnant with our second daughter, and I knew I wanted to be a stay-at-home mom for a while. But I also knew that I wanted to stay mentally active and engaged in something non-mom related. It only took a little while to realize this was my opportunity to start living all of my dreams: full-time mom and night-time author. I haven’t look back since!
2) How long did it take you to write Sunbolt from start to finish?
I wrote the first draft of Sunbolt plus the following two novellas while overseas. My father-in-law had just passed away after a difficult struggle with cancer, and I was staying with my husband and his family as they put their affairs in order. The three novellas just sort of poured out of me in the space of a month. I let them be and came back to them three years later, read them, and decided to revise. Sunbolt took about seven months of revision before it was ready to go. So actual writing time was probably about eight months. Plus three years of down time. 🙂
3) Is Sunbolt part of a series? How many parts would there be in the series?
Yep, Sunbolt is a novella series. Each novella will run about 40-45 thousand words (about half the size of your typical novel). I’ve got three drafted out, and expect that the total series will actually number about six.
4) What are your writing goals for 2013?
Ha! I was just sitting with my planner the other night, revising my goals since I’m already behind 🙂 I plan to get the second installment of the Sunbolt Chronicles revised and take it through two rounds of beta-reading by the end of the year. I also plan to completed a first draft of a completely different story–a trilogy featuring Rae, the heroine introduced in my free short story “The Bone Knife.” This trilogy, set in the same world as my debut novel, “Thorn,” asks what happens to the women and children across the kingdom who disappear without a trace.
5) What is your editing process like?
I’m still figuring it out, but I think I’m finally finding what works for me. After I complete my first draft, I send it out to beta-readers for what I call Round One. This is the big-picture read: my readers are looking for what works and what doesn’t, plot holes, character inconsistencies (or irritating quirks), what they need more of. When I get their comments and suggestions back, I write each one down on a post-it and stick it in a notebook. The notebook is subdivided by chapter, so I know where each edit will take place (scenes that need to get moved get a sticky in the chapter where they’re supposed to go). As I work through the post-its in my notebook, I peel them off and stick them at the back until I’m left with clean sheets. Then I go to Round Two beta-reading, where I ask my readers to do line-edits, identify any remaining inconsistencies, and let me know if anything vital is missing. In this round, I ask for readers to use track changes, and go through each manuscript I receive back, entering their changes (or not) into my master copy. This is the minor, nit-picky editing stage. Once that’s done, all that’s left is to have the manuscript professionally proofread and plan my release.
6) Are you working on something right now? If so, can you tell us more about it?
I’m working on Book Two of the Sunbolt Chronicles. It might sound like I’ve got it all set and just need to polish, but between the first draft of Book One and the release (read: two rounds of beta-reading), Book One changed a lot, and gained an additional 15,000 words in length and plot. That means the draft I have of Book Two needs some serious work before it’s ready for my first round of beta-reading. I’m giving myself a month or so to whip it into shape, and then it will be time to sweet-talk my Round One readers into making Book Two part of their summer reading 🙂
Thanks so much for having me on your blog, Majanka!
Thanks for answering my questions, Intisar! 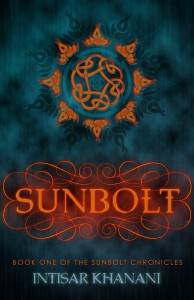 The winding streets and narrow alleys of Karolene hide many secrets, and Hitomi is one of them. Orphaned at a young age, Hitomi has learned to hide her magical aptitude and who her parents really were. Most of all, she must conceal her role in the Shadow League, an underground movement working to undermine the powerful and corrupt Arch Mage Wilhelm Blackflame.

When the League gets word that Blackflame intends to detain—and execute—a leading political family, Hitomi volunteers to help the family escape. But there are more secrets at play than Hitomi’s, and much worse fates than execution. When Hitomi finds herself captured along with her charges, it will take everything she can summon to escape with her life.

Intisar Khanani grew up a nomad and world traveler. Born in Wisconsin, she has lived in five different states as well as in Jeddah on the coast of the Red Sea. She first remembers seeing snow on a wintry street in Zurich, Switzerland, and vaguely recollects having breakfast with the orangutans at the Singapore Zoo when she was five. She currently resides in Cincinnati, Ohio, with her husband and two young daughters. Until recently, Intisar wrote grants and developed projects to address community health with the Cincinnati Health Department, which was as close as she could get to saving the world. Now she focuses her time on her two passions: raising her family and writing fantasy. Intisar is hard at work on two new projects. The first is a companion trilogy to her debut novel Thorn, following the heroine introduced in her free short story The Bone Knife. The second project, The Sunbolt Chronicles, is a novella series following the efforts of a young mage as she strives to bring down her nemesis, a corrupt and dangerous Arch Mage who means to bring the Eleven Kingdoms under his control.