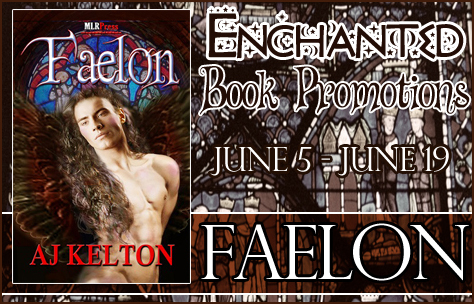 I’m happy to host two authors on my blog today. Jordan and Angel are a writing duo and they write paranormal romance novels, like their current book, “Faelon”, which is touring right now. I hope you enjoy the interview with these two authors – I certainly had a blast!

1) Is Faelon the first in a series or a standalone?

Jordan: Faelon is the first book in the Forgotten Touch series. The second is being worked on as we speak and we hope to have it released by early next year.

2) How long did it take you to write Faelon from start to finish?

Jordan: Not as long as some of the other ones I have written. My writing partner called me up and asked if I could come up with a holiday themed story for an open call that MLR Press had. I wanted to do a story set around Halloween which is why Faelon is set in October. I knew people would choose vampire and shifters since that is what is popular at this moment. I talked it over with my partner and we decided to do a nephilim. The bases for the story took us maybe 30 minutes to talk through. The story itself I had typed out and ready for my partner to look at and add her creative description in about three months.

Angel: Not long at all really. The open call for submission email was posted on a mailing list and I asked Jordan if he had any ideas for a holiday story. He got back with me within a few hours and that evening we started talking about it and Faelon was born. It was probably the quickest story we had and then once we got the story written, we went back and added the rest of the story.

3) What was the most challenging part about writing Faelon?

Jordan: Well there were a couple of things that were challenging in Faelon. The first thing was the sex. I had to come up with creative yet believable sex scenes. To show Jax as inexperienced yet willing to learn and show Faelon as the experienced sex slave but make him shy at the same time. The second thing was to show the strength and weakness each man had without over powering either character or the story.

Angel: There is a fine balance in the relationship between Jax and Faelon. Once the story was written, adding the emotions and then writing the whole relationship so that the readers will understand the complexity of it.

Jordan: Well this year I have my first solo project out. Legion under the name Rider Jacobs will be out in a few weeks. I hope to finish the sequels to the three series we have out at the moment along with starting the sequel to Legion.

Angel: I would like to finish up the sequel to Faelon, Marco and Under The Australian Sky, as well as the sequel to my solo projects as Angel Rothamel.

5) Where did you get the inspiration from for Faelon?

Jordan: I’m not sure where my stories come from. I know it sounds odd but it is like the characters come to me and tell me their story. I will be sitting there and I can almost see them walking up to me. Sometimes I am sitting there and parts of the story just appear to me and I have to write it down. I wish I could tell you I had a formula to writing and coming up with ideas but I really don’t.

Angel: It varies with me. Sometimes they come to me just as I am getting ready to go to sleep and in the few minutes, they tell me their story and when I have a moment the next day I begin to jot it down. Other times, I find I am just sitting at my computer and my fingers just start typing. I don’t really have a rhyme or reason for inspirations for the most part… Sometimes though when writing I do add a certain character that is inspired by someone.

Jordan : Well Legion comes out in June and I’m working on the sequel which will center around his brother Adoni. I have been working on Much Ado about Twins which is the sequal to Faelon. This book you will get to meet the twins Shamalyn and Shaoydi and find out how Jax’s life changes with not only a nephilim in his life but twin succubi also. We also find out a little more about the Demon that is after Faelon and why.

Then I am working on the sequel to Under the Australian Sky. So far I haven’t named it but you will see Dylan, the waiter from the first book finding his soul mate.

Angel: I just had my first SEALs of Cedar, Colorado series book come out, that was Misunderstandings, written by Angel Rothamel. I am working on the sequel to that, which will be Lucian and Tristan’s book. I just finished writing the wedding scene for that one and I am really happy the way it turned out. I am working on Faelon’s sequel, and letting the twins talk to me. I am also working on Evan’s book, which is the sequel to Marco. That will deal with Evan recovering from a car accident and then working on their relationships.

Who knew that loving a Nephilim could be so dangerous.

Faelon, a 3000-year-old nephilim, fleeing a demonic master, found safety with the church. He has repaid their kindness by translating various artifacts. Father Donovan has watched as Faelon became a recluse, fearing those who would harm him.

Jax, wanting a change, moves to Salem, MA where he finds work as a churches security guard. Not believing that Faelon is a nephilim, he is forced to confront his own beliefs in the supernatural.

Can he learn to accept Faelon, and be the master he requires? Or lose the man he loves to the demons who would harm him.

AJ Kelton are the dynamic writing team of Angel and Jordan. The couple met online several years ago on an Alexander fan site and have been friends ever since. Angel soon found that Jordan had a flare for storytelling with several half-finished stories on her computer. Angel encouraged Jordan to finish the stories and with help in creative description she decided to send the stories off to MLR press. They were both shocked and excited when they got the news that Faelon was accepted for publication. While Jordan may have a flare for storytelling she doesn’t enjoy the smaller details in getting a story ready for publication. That is where Angel comes in; she spends countless hours getting the story ready after line edits, going over each line in proofing and formatting, making decisions such as covers and fonts, all things that Jordan just has problems focusing on.

Angel is always on the lookout for her perfect mate, a cross between Ethan from Under the Australian Sky and Evan from Marco. Until Mr. Perfect appears at her door, or in front of her booth wanting an autograph she loves to read, take pictures and attend concerts of all kinds. She loves all things 80’s. Angel lives in Texas with her two dogs, Daisy a beagle who she insists is nothing like snoopy and her Chihuahua Bonita.

When not writing Jordan loves to read anything from Amish romance to the dark taboo books of fiction both M/M and Het. She is a very avid reader, except when writing because she doesn’t want to be influenced by what she is reading. Jordan loves to travel and often her latest vacation spots show up in his books. While Jordan is always looking for that perfect place to live at the moment she can be found in Kansas.

Both writers have solo projects coming out in the future, Angel with Misunderstandings under the name Angel Rothamel. Jordan with Legion under the name Rider Jacobs.

Both authors would love to hear from you. You can contact them via their web page AJKelton@AJKelton.com. You can also find them on Facebook under both AJ Kelton, Angel Rothamel and Rider Jacobs.