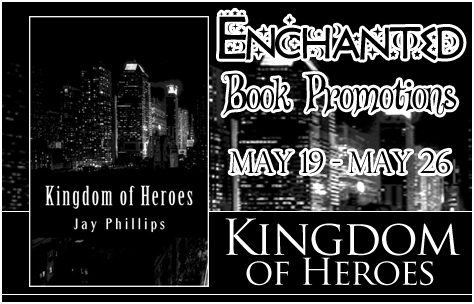 I’m hosting an interview with author Jay Philips today. Jay is the author of fantasy / mystery / superhero novel “Kingdom of Heroes”. He’s touring his novel this week, and I’m glad to snatch an interview with him. Thanks for answering my questions, Jay!

I’m not sure there was ever a point in my life when I didn’t want to write. I remember being a little kid and playing with my GI Joe action figures (for the record, they’re not dolls; they’re action figures). Every play time was a Shakespearean event of epic proportions. Characters lived; characters died; there was tragedy and betrayal. I would play for around five hours on a Saturday then be completely spent emotionally for the rest of the week. People would say: “He’s so quiet.” And I would just sit there, crying in my thoughts, thinking: “Why did Snake-Eyes have to die like that. He didn’t deserve it.”

2) How long did it take you to write Kingdom of Heroes from start to finish?

Just under three years in actual time, but in writing time, it was somewhere around eight to twelve months. I was halfway through it when I had a great upheaval in my personal life, and it took me right at two years to get back to it.

3) What was the most challenging part about writing Kingdom of Heroes?

Other than having a five year old son who believes sleep is for quitters, it was the ending. I didn’t make the final decision on how the ending was going to take place until almost a week before I began writing it. In my head, I must have went through about seventeen separate scenarios for the ending, but I am quite happy with the final result. Out of all of my options, I think it absolutely works the best.

My goal is to have two more books done by the end of 2013. I can’t let myself take so much time to complete a project, so I’m setting myself hard deadlines to finish.

I edit as I go, taking a break every fifteen or twenty pages and completely going back through what I’ve written. I find this helps in case of major changes (I will literally erase several paragraphs at a time) and maintaining the continuity as I write. Then, once the manuscript is finished, I go through the entire thing at least three times, line by line, looking for other mistakes or changes that need to be made.

6) Where did you get the inspiration from for Kingdom of Heroes?

The main inspiration was the years of comic book reading I did when I was a kid and a teenager. Between the ages of eight and eighteen, I read every comic book I could get my hands on. Then the prices went up, and me being the huge cheapskate that I am, I cut myself off cold turkey. But I’ve found that the comic book style of storytelling has stayed with me over the years, and this method has influenced both Kingdom of Heroes and most of the writing that I do.

I am currently working on a collection of short stories that will be called “Monsters and Madmen.” It will be six separate stories, ranging in length from five pages to fifty, that will all be centered around the idea in the title; the stories will be a combination of fantasy, thriller, and horror, with the genres kind of bleeding (no pun intended; okay, maybe I meant it a little) into each other. I hope to have this ready to publish in about a month, right around the middle of June. After that, I am shooting for the end of the year to have my next full length novel finished. I have the base story, the characters, most of the plot (I’ll make up the middle as I go along like I always do), but no title yet.

Good luck writing your short story collection! It sounds like a great idea!

About Kingdom of Heroes 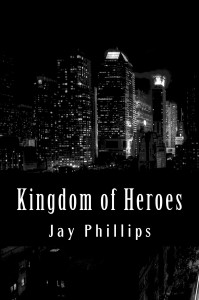 Years ago, a gene virus ran rampant across the planet, leaving a small percentage of people gifted/ cursed with extraordinary abilities and humanity itself forever changed. Suddenly, there were people with super strength and speed, people who could read minds, people who could teleport themselves from place to place with but a single thought.

Several of these people joined together to form The Seven, the most powerful group of supers the world had ever known. Led by the enigmatic Agent America, The Seven kept the country safe from threats both foreign and internal. That is until the United States government decided the threat of the supers outweighed any protection they could offer.

After a war between the super powered and the normals (as non-powered humans are now referred), The Seven have placed themselves as the nation’s rulers, controlling the country through fear and intimidation. But now, someone or something is murdering The Seven one-by-one, single handedly attempting to make them pay for all of the sins they have committed.

To stop a killer, The Seven turn to a man who hates them as much as anyone. An imprisoned man known only as The Detective finds himself in the unenviable position of helping the people he despises in exchange for his freedom. 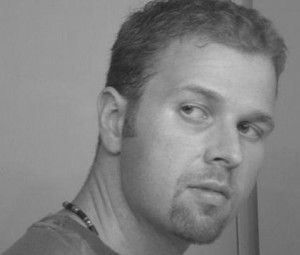 Jay Phillips lives in Tennessee with his wife, his two children, and a golden retriever named Shippo. A lifelong lover of comic books, Star Wars, Doctor Who, and everything else from the nerd culture, he prides himself on writing fiction that crosses boundaries.