We’re celebrating the release day for contemporary romance comedy “There Goes The Groom” by Jana Richards. The author is giving away an Amazon Gift Certificate to one lucky winner! Scroll down to find out how to participate.

About There Goes The Groom 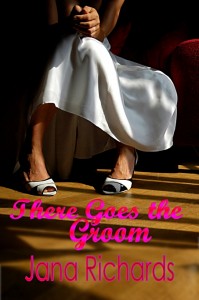 Eight years ago Tony left Olivia at the altar. He was sure she didn’t really want to marry him. Now he’s back, and they’re forced to work together.

Coming home isn’t easy for Tony, because his father wanted him to work at a trade instead of going off to college. Their relationship is still unsteady. Even before Tony’s return, Olivia began questioning the depth of her love for her fiancé, a man she chose because he was safe and reliable. Yet the last thing she wants is a loveless, faithless marriage like the one her parents suffered through.

When Tony, who never stopped loving her, insists her fiancé is the wrong man for her, Olivia sets out to prove him wrong. But the sexual chemistry between them is still strong, and so are her feelings for him. Even so, how can she break her engagement, hurt her fiancé as she was once hurt? And how can she trust Tony not to abandon her as he did before?

If anyone does the jilting this time, she will.

Jana Richards has tried her hand at many writing projects over the years, from magazine articles and short stories to full-length paranormal suspense and romantic comedy. She loves to create characters with a sense of humor, but also a serious side. She believes there’s nothing more interesting then peeling back the layers of a character to see what makes them tick.

When not writing up a storm, working at her day job as an Office Administrator, or dealing with ever present mountains of laundry, Jana can be found on the local golf course pursuing her newest hobby.

Jana lives in Western Canada with her husband Warren, and a highly spoiled Pug/Terrier cross named Lou. You can reach her through her website at http://www.janarichards.net

Jean-Guy made an elegant little bow. Tony eyed him suspiciously, wondering if he was flirting with Liv.

The handyman reached for Liv’s hand. “Bien sûr, mademoiselle. I am here to serve you.”

Damn it, he was flirting with Liv!

“That’s fine, Jean-Guy. We won’t need to bother you further. If you leave the traps with us, I’ll make sure the mice are taken care of.” He stepped between the French Lothario handyman and Liv. Jean-Guy raised his eyebrows.

“Of course, Monsieur. While Mademoiselle Taylor’s fiancé is away, her friends need to…look after her.”

Tony stood firm. “Yes, they do. I wouldn’t like to see anyone take advantage of her.”
“No, of course not. Monsieur Stuart would not like that,” he said, with a knowing grin.

Tony curled his lips in the semblance of a smile. “We’ll take it from here, Jean-Guy. Thanks for the loan of the traps.”

“Wait a minute,” Liv said, looking from one to the other. “Jean-Guy—”

He made a little bow. “You are very welcome, Monsieur. Good luck, Mademoiselle.” He slipped out the door.

Liv folded her arms across her chest. “What the hell were you thinking? Jean-Guy is the maintenance man. He’s paid to look after disasters like this. I can’t bear to deal with mice.” She shuddered.

“You won’t have to. I’ll look after everything.”

“You never asked me if I wanted you to look after anything. You just pushed your way in.”

Tony’s temper flared. “Maybe if your fiancé was around I wouldn’t have to. It was obvious to me that Jean-Guy was flirting with you. What do you know about him anyway?”

“Don’t be so bloody naïve!” Now he was really angry. “I can’t believe your fiancé would leave you at the mercy of men like him. What’s this I hear about Stuart staying in Moncton?”

Liv turned and walked into the living room. “He has an amazing job opportunity there. Besides, his father still isn’t well.”

Tony followed her. “Is this what you want, Liv? A long distance relationship with you and your husband thousands of miles apart?”

“Lots of couples do it,” she said, not looking at him.

He tipped up her chin, forcing her to look at him. “But is that what you want?”

For a second Tony saw a glimpse of vulnerability on her face which she quickly masked with a show of steely determination.

“I don’t have to defend my relationship with Stuart to you or anyone else. It’s none of your business.”

Tony dropped his hand from her chin. She was right. Her relationship with Stuart was none of his business. He should keep his nose out of it, no matter how big a mistake he thought she was making.

Win a $20 Amazon Gift Card! All you have to do is fill in the Rafflecopter form to participate.

2 thoughts on “Release Day Party There Goes The Groom”