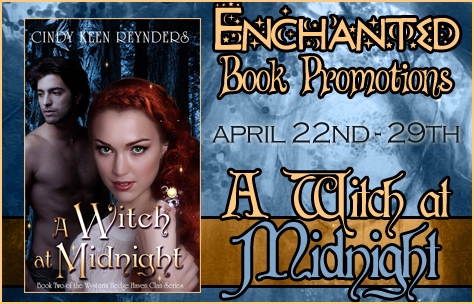 I’m hosting an interview with author Cindy Reynders today. Cindy is the author of paranormal romance novel “Witch at Midnight”. She’s touring her book from April 22nd to April 29th.

Thanks for answering my questions, Cindy!

I’ve wanted to write novels since I was a little girl, but I didn’t really know how to go about it until I joined my first writer’s group in the early 1990s. After attending writing workshops and meetings, I learned the process.

2) Where did you get the inspiration from for Witch at Midnight?

Since this is the second book in a series, I knew this would be a story that highlighted another Rose sister from the Wysteria Hedge Haven Clan. Cassie and Nick’s story came pretty easily to me, and the plot unfolded nicely. I’m a huge fan of Greek mythology and I studied it in high school and college. It’s exciting that I finally got to use a lot of my research in this story.

3) How long did it take you to write Witch at Midnight from start to finish?

It took me about seven months to write, and another month to do my own self edits in a second draft.

4) What was the most challenging part about writing Witch at Midnight?

Getting up and writing at 4 a.m. each morning before heading off to work. I also got sidetracked at the beginning of the book and did a complete rewrite of the first five chapters. That wasn’t very fun, but I knew it needed to be done to produce a quality manuscript.

I will finish the third book in the Wysteria Hedge Haven Clan series titled, “Witch Tease.”

I do some editing along the way as I write the book, but I try not to get too hung up about it because I know in the second draft I’ll polish everything up. When the second draft is complete, I take about a week off from writing so I can rest my brain. Then I print out the entire manuscript and read it all and make suggestions to myself in the margins. This is grueling to me as I see weak spots and areas where I need to improve. It’s also positive, because I see areas that I think are done well, and I’m always happy about that. I can find plenty of distractions to keep me from finishing the book, but with a deadline looming, I drag myself back to the computer to clean up the story and make it flow correctly so I can send it off to Stacey Turner, my editor at Angelic Knight Press.

I’m working on the third book in the Wysteria Hedge Haven Clan series titled, “Witch Tease.” In this book, another witch sister finds herself in a tight predicament. Lizzie is searching for her missing her coven, which mysteriously disappeared during a Blessing of the Brooms Ceremony. Kincaid McAllister, a Caledonian Tracker, is the only person who can help her find out what happened to them. This complicates matters because Lizzie and Kincaid knew each other long ago in historical Scotland. At that time, they were romantically involved, but for personal reasons, he had to leave her. While Lizzie knows she needs Kincaid’s help, she’s also concerned because she doesn’t know if she can trust him. Adding to her troubles, she’s still attracted to the handsome Scotsman, and he’s also finding it difficult to resist her. Both try to deny their feelings for each other as they search for Lizzie’s coven, yet as events pull them along, there will be plenty of sizzling encounters between Lizzie and Kincaid.

Thanks for answering my questions, and good luck writing ‘Witch Tease’!

About A Witch at Midnight

Title: A Witch at Midnight

Spirited away by a demon on the eve of her wedding, Cassie Rose, high witch of the Wysteria Hedge Haven Clan, finds herself trapped in the dark Underworld realm of Hades. Determined to return to Wysteria and her husband-to-be, the powerful warlock Viceroy of Oregon, she manages to escape.

While running for her life, she encounters Nik Zaros, a man so handsome she swears he would put a Greek statue to shame. Strapped to a plow being pulled by the mighty Marathonian Bull, Nik has been tortured and is near death. Cassie’s heart goes out to him, and she feels compelled to take him along with her.

Upon recovering, Nik is immediately attracted to the charming sorceress. Though she stirs his blood, he can’t help but suspect her of being in league with the demon, Prince Drakon. He soon discovers Cassie wishes to be free from the demon’s control, just as he does, and only love’s magic can save them.

Relentlessly pursued by Prince Drakon, Cassie and Nik begin a dangerous journey across the Underworld. Dodging perils at every twist and turn, they develop a profound love for one another, and discover only a sacrifice of the heart can keep them together.

Cindy lives in Cheyenne, Wyoming with her husband, Rich, and her little dog, Ewok. A Witch at Midnight is the second book in her Wysteria Hedge Haven Clan series about seven witch sisters with a talent for magical adventures. The first book is 7 Year Witch, and the series is published through Angelic Knight Press.