I’m hosting an interview with author Catherine Lavender today. Thanks for appearing on my blog, Catherine!

Literature has always been my first love. As a young girl, I can always remember being buried in a mountain of books. I always thought that authors were somewhat like miniature Gods who could create an extraordinary world filled with interesting characters, and creative places. I knew at a young age, that I too wanted to make words come to life with paper, pen, and my imagination.

2) Where did you get the inspiration behind ‘Eighty-Eight Keys’?

Life is the inspiration behind everything that I write. I think life itself is one giant story book filled with adventure, sorrow, joy, obstacles, and victories.

3) Do you write an outline before you start writing? Or do you write as you come up with ideas?

I always attempt to write an outline to help guide me through a story; however I always tend to write freely with fresh ideas, and let the story flow in its own direction. Coming to think of it, I’m pretty sure that the original outline of Eighty-Eight Keys, is quite different then the actual manuscript.

4) Can you tell us about your editing process?

As far as the editing process, there were several people who I trusted professionally that gave me feedback about the story. I also worked closely with the editor and manager of my publishing company. I think no matter how much editing you do, there can never be enough. Editing thirty chapters can be overwhelming, but necessary.

5) Who was your favorite character to write about?

I think Mrs. Turner put a nice ‘comical touch’ to the story, and I really enjoyed writing about her. She had become a bigger part of the story than what I had originally planned.

6) What was the most challenging part about writing ‘Eighty-Eight Keys’?

I think the most challenging part about writing Eighty-Eight Keys, is keeping the connection between all the characters. Sometimes, a certain character can have so much personality, that it can almost create another story on its own.

I’m working on my second novel ‘Shadow of a Yardbird’ which is a suspense novel about a homicide detective name Charlie that is gambling with his life and career because of an obsession to catch a serial killer. His wife Rebecca who is trying to get out of their failing marriage feels that she is being secretly watched and is starting to lose her sanity. Both struggling with family conflict and trying to keep their life on track. Charlie and Rebecca are afraid to trust anyone, not even each other. 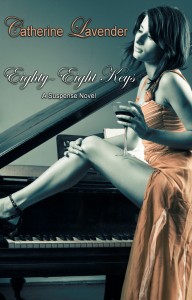 Leah is a young woman who is trying to break free from a strict religious background and pursue her dream as a pianist in the world of show business. While trying to find her independence her heart is held captive by Jason Rowe a local basketball star who established an organization to help troubled youth. When Jason is found murdered in his home, Leah is determined to get answers from a closed investigation. During her state of emotional turmoil, Leah finds comfort not only in the melody of her music, but in the arms of a married man named Calvin. With her dreams at her fingertips, Leah is
tangled in a web of lies and deceit. Despite the fear of learning the truth, Leah has to realize that only the truth can set her free.

Buy from Amazon, B&N and Smashwords.