I’m a preschool teacher. I have a Bachelor’s in human development. And I am the mother to two wonderful boys, an 8 year old and a 14-year-old who  forgets that he’s not 30. I love to be creative and create masterpieces.

Folami: I would say, I’m a closet goof, masquerading as a mature, sensible adult.  I just graduated from St. John’s University with a Master’s Degree in Biology. So I am currently looking for a job in a lab, but I would much prefer to be lounging on the couch all day, writing a million novels.

Folami: The Exemeus is a story about two people trying to save their respective worlds, in different time periods and how they need each other to succeed.

3)      Why did you decide to write a young adult novel as opposed to an adult novel?

Folami: I have loved YA books since I was too young for YA and now that I’m too old for YA. I think I just never grew up.

Abeni: I think we chose Ya fantasy, because it appeals to the kid in all of us. I love the idea of magic, and having no boundaries to where your story can go. It makes the writing a truly liberating experience, where the sky is the limit.

I (Folami) was sitting with Alessandra Burch, the human resource manager at Enterprise Rent-A-Car, and we were conducting an exit interview. I thought wouldn’t it be funny if there was an exit interview for life.

Not too long after, when I was going through what I call Harry Potter withdrawal, I had a dream about a woman with red hair. I told my sister, and she said it should be blue hair. We discussed world building all the way to my friend’s wedding and I outlined a story, when I go back that night.  That story looks nothing like this story, but that was the beginning.

5)      What was the most challenging about writing “The Exemeus”?

Abeni: Honestly, for me it was just balancing the time between being a single mother of two and being a writer.

We made the goal to have the sequel written, edited and ready for publication in January 2014

Abeni: Not at this moment, but we’ll be starting on the second book in the series very soon. My sister, however, has been working on a project of her own.

Folami:  Yes, I’ve been working on a book entitled Bot2465. It’s in the preliminary stages, but it’s about a young robot that is created by another robot to enslave the remainder of the human race. Robots have already taken over the planet, but there are pockets of resistance and Bot2465 is supposed to infiltrate the colonies and help to enslave them. Unfortunately for her, her own colony turns on her because she appears too human. That’s about all I can mention for now, but hopefully I’ll send you an ARC one day. Thank you so much for having us, and I hope all your readers check out The Exemeus.

Good luck with your newest project! Hopefully I can read it someday! 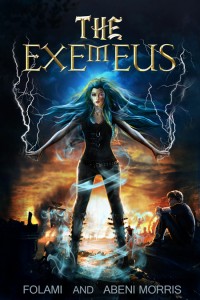 Hyalee Smith is dead, she just doesn’t know it yet.

Her short life was devoted to love and to hate. Love of the man who stole her heart, hate for the man who stole the world. Murdered by the government she swore to destroy, fate has given her another chance to make it right. But to save the planet, she needs the help of the most powerful mystic the world has ever seen—unfortunately he hasn’t been born yet.

In a world where fear is the only currency, Dephon has committed the ultimate crime: inspiring hope.

His only goal is to make it safely through ninth grade, but on a post-apocalyptic Earth run by the Treptonian government, it isn’t that simple. Heir to a legendary power, Dephon Johnson is the only threat to the government’s rule. And on Trepton, all threats must be eliminated. When hundreds of assassins are dispatched to neutralize him, Dephon is forced to fight back. His only chance of survival is to enlist the aid of the greatest warrior the world has ever known. The only problem is, she’s been dead for 13 years.

Folami and Abeni Morris are a sister-sister writing team. Together they wrote (and rewrote) The Exemeus series, somehow managing to accomplish it without murdering one another. Despite their tendency to finish each others thoughts and stick up for each other constantly, no, they’re not twins and thus deserve their own individual bio.

Folami grew up in the tiny city of San Mateo Ca, where nothing ever happens and no one ever leaves. She went to Xavier University for undergraduate, getting her B.A in physics and her B.S in Biology. After graduation she returned to California, to live in an even smaller city, where even less happens, Antioch Ca. During this time she escaped the monotony by hanging out with her imaginary friends Hyalee and Dephon, and by writing the Exemeus.

She finally escaped to Queens NY and now realizes that quiet and tiny aren’t so bad.

As luck (and logic) would have it, Abeni grew up in the same tiny little town as her sister, then she too escaped to the tinier town of Antioch. She has yet to leave. She received her bachelor’s degree in early childhood development from Cal State East Bay. She is the mom of two amazing kids, who swear that they deserve a percentage of the book proceeds and a ton of the credit. At least she raised dreamers.

Purchase your copy in paperback or Kindle format.