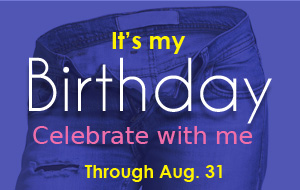 Nothing is better than the game of plotting. Starting out with the bare bones of a story, running it over and over through my head till I have enough flesh for something real is like eating a good piece of chocolate cake.

Maybe that’s why I like editing so much. Rearranging scenes to get a strong story is like putting together a puzzle. I’ll slash scenes like I would the fat off a chicken, all in the aim of creating intense literary reads that leave us living the story instead of reading it.

2)      What inspired you to write Superheroes Wear Faded Denim?

A desire to encourage others to rise up and achieve greatness. When life is knocking at our doors we should swing it wide open. That is why I chose to write about Blissany Cherry, an artsy, somewhat insecure college student who is forced to become a Jeanne d’Arc.

We all have to overcome obstacles to achieve our dreams. Mine was my sleeping disorder. Someone else’s may be lack of finances, fear, being too tall, not having a mom. Whatever the setback is, it does not matter. We can and must overcome it.

Honestly, I love Don Shimada’s “WTF” reactions to everything occurring in the novel. A senior in undergrad on track to one of the best law schools in the nation, he is rammed off course when he discovers his entire life has been nothing, but training to fight a war against a demon lord. Always willing to rise to the occasion, he fights even though he is not prepared. Shimada is my favorite type of character: he’s sweet, sarcastically funny, and not afraid to do what is right.

Apollyon, the evil dark lord, had to be the hardest character to write.  Having the mindset of someone over a 1,000 years old, he has to be extremely wise and somewhat methodical. Because a sign of maturity is how much of a reign we have on our emotions, I often wondered would someone at his age even react to anything. You think they would be immune to life, having experienced it all probably a million times.  It took me a couple drafts before I truly began to comprehend who he was as a character.

4)      Superheroes Wear Faded Denim is your debut novel. Looking back on it, is there anything you would’ve done differently if you could do it all over again?

I wish I took more time to develop the patterns in my final draft. Patterns are when a writer drops little metaphors throughout the story, connecting them to a greater overall message. It is a hard technique, and it is my dream to master it as I further my writing abilities.

5)      What was the hardest part for you during the writing progress from draft to finished book?

The hardest part for me was the querying process. It can be more work than actually writing the novel. My advice is to have a goal in mind. Know your top ten agents, so when it comes to editing your final novel you have an idea of how to structure your query to their liking.

6)      Why did you choose the new adult genre to write in, since it’s a fairly new genre?

I naturally write from the viewpoint of someone in their late teens to early twenties. I do admit to having a problem, one stemming from my childhood.

I first began reading adult novels when all my peers were still on The Baby-sitters Club. It has led to a writing style—how should I describe it? A prostitute from the roughest streets in Miami reading my first drafts would conclude I have a deviant mind. I write with no filter. Not to mention even though I abhor long, drawn-out sex scenes in novels, my first drafts are always laden with the stuff. Eventually I end up slashing them all out. It is a weird process, trust me I know.

After deleting the excessive amount of sex, violence, and dirty language in Superheroes Wear Faded Denim, I unearthed a novel not quite young adult and not quite old. It has the magic of Harry Potter, the wonder of Twilight, but the edginess of E.L. James (minus the copious amounts of sex as mentioned before).

I believe readers who love young adult novels, but are not afraid to talk about adult issues will love my book.

Writing trumps all daily activities. I have been known to skip out on a party just so I could come home and write. Yes, I am a nerd. It’s such a relief knowing they rule the world and everything.

8)      Are you currently working on something new? If so, can you tell us more about it?

I am currently working on a new adult novel called Voodoo Kisses. You can find it on FictionPress and Wattpad. My synopsis is below.

Being from a family of powerful witches is no banana pudding, Jazzy can attest. Not only is magic dangerous, it has destroyed her life. Wanting nothing to do with it, she won’t even conjure up Mr. Right. Luckily she doesn’t have to. When a love stronger than hard liquor strikes, bringing a wealthy bachelor into her life, Jazzy has to wonder. Can love really be this good or has magic crept uninvited back into her life? 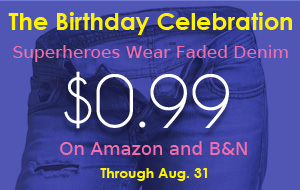 Thank you all for partaking in this interview with me. Being that my birthday is Aug. 11, I have reduced the price on digital copies of Superheroes Wear Faded Denim from $2.99 to $0.99 cents on both Barnes and Noble, and Amazon. Come celebrate my birthday with me.

Blissany Cherry is tired of sleeping around. Her neurologists’ sleep solutions have failed her. Now that her bizarre sleeping habits have begun to include week long dreams she has resorted to her own methods for a cure.

METHOD ONE: CONTROL DREAMS. All attempts to morph dreams about a gorgeous warrior into romantic fantasies are thwarted. He keeps on insisting she is destined to marry a great king and lead their armies into war. At the end of every dream he asks her: will you fight the war and save mankind?

She laughs in his face.

METHOD TWO: RESIST! Blissany has plans for her life. None include fighting an intergalactic war. When her dreams begin spilling over into reality, she is forced to make a decision that will forever redefine her life. Standing between destiny and desire, she is left with only one option.

Law Reigns has an odd obsession with romance. At the advice of her friends, she gave up the plight of playing cupid in their lives. Developing her own characters to manipulate proved to be more rewarding. After having studied creative writing at the University of Florida, she decided to write Superheroes Wear Faded Denim. A proud Gator alumni, she based her novel where blood runs orange and blue. She personally invites all adventure druggies and love fanatics to dive into the pages of Faded Denim, a story that transforms a swampy, southern town into a battlefield for life and love.